Sorry … another longer break than planned…

So, the rain we prayed for arrived, and the temperatures dropped but it seems there’s always a price to pay for the good things that we enjoy. This last week we travelled to Nairobi and I came back, about 24 hours later, with a sore throat and a runny nose and the type of head cold that just has 'no business' being here in such a hot climate! On our return to KoseIe it quickly became evident that the frog population had survived the drought and were now very successfully repopulating the pond that had reappeared in a deep hollow in the field immediately behind our bedroom window. Let me tell you … Paul McCartney’s frog chorus doesn't even begin to get close to the cacophony that was being created by the huge variety of frogs now living there! Terry slept through it three nights in a row …. I didn't! Then, last night, I spent an evening writing a long blog that I've decided not to post because although it might not get me deported it probably wouldn't help my application, currently in the Nairobi immigration office, requesting permission to stay here for longer. So the following is my revised ‘shorter’ version of a story about female Kenyan MP’s who ‘stormed’ out of the government chambers in response to an amendment to the new Marriage Bill being proposed by some male Kenyan MP’s.

Now marriage is, without doubt, a ‘hot potato’ subject anywhere on the planet and not least in countries like our own who have wrestled for years over the issues of divorce and are now grappling with the law that says ‘marriage’ can extend to a relationship between two people of the same sex. So I really am trying very hard not to be judgemental when I share the details of this Kenyan story. The main purpose of the new law seems to be ‘to bring civil law, where a man is only allowed one wife, into line with customary law, where some cultures allow multiple partners.’ The intentions are very laudable - actually trying to facilitate some guaranteed financial provision for wives in the event of death or divorce so that, in either circumstance, she should be entitled to a minimum of 30% of the husband’s property. However, some male MPs decided to vote for another amendment, an amendment ‘to allow men to take as many wives as they like without consulting existing spouses.’ (Traditionally, first wives are supposed to give prior approval.) MP Samuel Chepkong'a, who proposed the amendment, said that when a woman got married under customary law, she understood that the marriage was open to polygamy, so no consultation was necessary. Only 30 of Kenya’s 69 female MP’s were actually present for this Bill, those who were there did ‘walk out in disgust’ – but, ultimately there seemed to be no planned, serious opposition to the almost 300 male members of parliament who supported it and now it is just waiting for the President’s signature.

Again, I appreciate that to many people the tradition of polygamy is no better and no worse than the extra- marital affairs, the easy divorces or serial relationships that are accepted and even, to some extent, celebrated through western media and culture. In the past, polygamy has been widely practised across Africa and by many of the different tribes within Kenya but, in this south western corner of Kenya polygamy has been very much the ‘norm’ for as long as anyone can remember and continues to be practised more widely than in any other region. One of our local MP’s was quoted as saying "When you marry an African woman, she must know the second one is on the way and a third wife… this is Africa." Over the years different people have given me different explanations for this life style choice, mostly citing the historical context of men owning big pieces of land for which they needed many daughters to farm and sons to defend. But today, the statistics for population and land use together with the frequent news stories of extremely violent acts committed between even very close family members (almost always because of the battle for increasingly small pieces of land) fail to support this simple cause and effect.

In the 12 years that Hope and Kindness has been here in this rural, Luo community, with many church buildings around including our own modest timber and iron sheet building, we have not witnessed or heard of a single ‘church wedding’ (countless funerals but not one wedding.) Many of our neighbours are regular church attenders and yet, as was explained to me the other day, everyone seems to recognise that a ‘church wedding’ symbolises a union between just one man and one woman …. hence the evidence that most people (or at least, most men) prefer to make other arrangements. On the other hand I have lost count of the number of young people and grown men and women who have told me of the bitterness they carry because their own life chances were spoilt by the poverty that so often accompanies a polygamous family – a family with more children than it can afford to feed let alone educate. The repeated division of land, the rapid population growth and the high incidence of HIV have, for very many, made the reality of polygamy if not a living hell, at least a far call from God’s Kingdom ‘on earth as it is in heaven.’ Back in January, late one Saturday night, I listened to the now familiar sound of what sounds like a ‘boogie on down disco’ out in the bush (but is actually the new tradition of hiring a generator and PA for celebrating a funeral) and I asked our night guards “Who died this week?” I was told it was a young mother, who was HIV+ve. When I asked if she had been taking the anti-retro-viral drugs that we've seen rescue so many people over the last five years I was told, “Yes, yes she was,…. but when her husband took a second wife she became very down and just decided to stop….” (She just gave up this life giving medication and chose death as a preferable option to watching her husband take a second wife!)

I’m not sure who I felt most sorry for.... but, at the risk of saying too much, it wasn't the husband ….

On a much lighter note, depending on your personal view point, I have a confession to make, most notably to all of my ‘Eco warriors’ back at Feckenham First School who were always so supportive of my desire to preserve the environment for all the creatures that we share the earth with …. Well yesterday I, together with the children in our home, deliberately destroyed an ‘amphibian habitat!’ The new pond (right outside my bedroom window, remember) has now been filled with stones and soil. In my defence there is another big pool at the other end of the field and a significant number of frogs, I’m quite sure, have managed to successfully relocate. I really am very sorry but … for my own sanity and for the sake of everyone else here ….. I have to get my sleep!

This is the one that does a traditional deep throaty “riiiiiibett”

The rest make a combination of sounds like a chorus of ‘shrieking’ bats, a dog’s ‘squeaky’ rubber toy and the ‘pop or plop’ sound of someone passing wind in the bath! (No I’m not exaggerating or making any of this up! If you don't believe me .... come and 'hear' for yourself!) 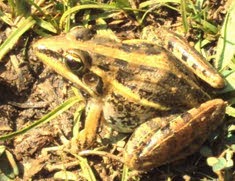 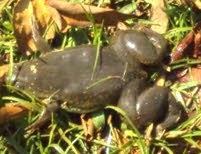 Hope and Kindness
Terry and Judi are missionaries based in a small rural community in Kenya. Hope and Kindness is a UK based charity started by Terry and Judi to support their work in Kenya. We have 2 children - Tom who is a gifted musician and is in the third year of a music degree and Ellie who started studying medicine at Durham University in October 2012.